June 26, 2014
9
Share
Facebook
Twitter
WhatsApp
Linkedin
France could not maintain their prolific start to the 2014 Fifa World Cup but still finished top of Group E following a goalless draw with Ecuador which eliminates the South Americans. 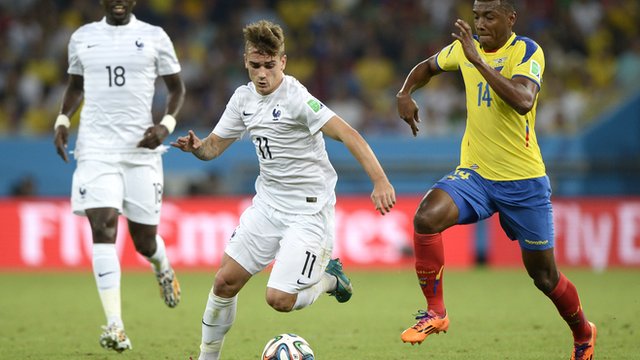 Antoine Griezmann, Paul Pogba, Karim Benzema and Loic Remy went close as the much-changed French were frustrated by an Ecuador side who had captain Antonio Valencia sent off.

But after impressive victories over Honduras and Switzerland, a point was enough to send Les Blues through to the last 16 and a meeting with Nigeria in Brasilia on Monday.

Although the full-time whistle was met with jeers by sections of a crowd baying for more goals from a tournament that has already delivered so many, France looked perfectly content.

Didier Deschamps made six changes to his starting line-up and, while France lacked a finishing touch, they looked no less organised or physically imposing than in their previous two games.

With Bacary Sagna, Laurent Koscielny, Morgan Schneiderlin and Paul Pogba among those to come in, Les Bleus illustrated a strength in depth that could prove vital in the knockout stages.

The danger France pose going forward – constantly interchanging attacking positions and pressing high up the pitch – has led many to install them as title contenders and the way they controlled possession, probed for a breakthough and defended as a team was impressive.

But they seemed to be playing within themselves and clear-cut openings were scarce. Pogba’s header was tipped over the bar by Alexander Dominguez and Moussa Sissoko volleyed straight at the goalkeeper, before Enner Valencia drew a sharp save from Hugo Lloris at the other end.

The match became more stretched after half-time and Griezmann’s volley was pushed on to a post by Dominguez before Manchester United winger Antonio Valencia was dismissed for a late challenge on Lucas Digne.

Pogba had a powerful drive blocked, Blaise Matuidi was denied by Dominguez after a neat exchange with Benzema and Pogba somehow missed with a free header from close range.

Lloris was forced to repel Alex Ibarra’s strike before Dominguez thwarted Benzema, who linked well with substitute Olivier Giroud but could not score his 10th goal in nine international appearances.

Giroud, fellow replacement Loic Remy and Pogba all tried to force a winner, only for Ecuador to hold the 1998 champions to a stalemate that will give them little cause for concern.

France coach Didier Deschamps: “I’m satisfied, we have finished first in our group, we are qualified for the knockout round and all is well.

“My team selection was not by chance and it’s important that all players get into the rhythm. Now we have five days to prepare for our game against Nigeria.

“Ecuador had a team with 10 players in front of us defending well, we had an enormous number of chances and we are disappointed we were not as effective as in our previous matches.

“Some people thought we were the kings of the world after beating Switzerland but Ecuador showed they have qualities, and Argentina had a difficult match against Nigeria.”

Ecuador coach Reinaldo Rueda: “It is quite unfortunate everything that happened. I am very respectful of the referees and these issues are water under the bridge – there is nothing to be done.

“We lost an important man and we suffered from it. It’s quite unfortunate some of the decisions made by the referee did not favour us but that’s in the hands of the people who have to analyse the performance of the referee.

“This has been a short tournament for us, we paid the price for that first match when we lost against Switzerland.”