Thomas Mueller once again made the difference as Germany qualified as winners of Group G with victory over the United States, who also reached the last 16 at the World Cup. 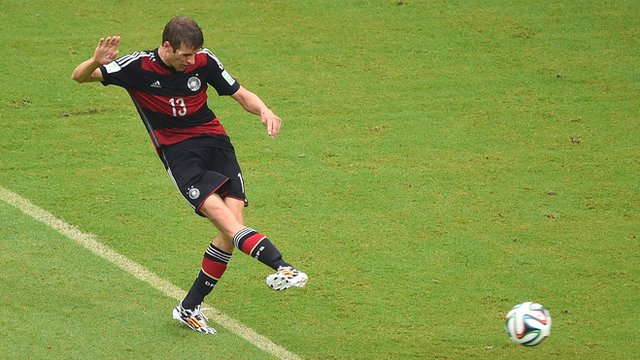 The Bayern Munich forward scored his ninth World Cup goal in as many games to give Germany a routine win at a rain-soaked Arena Pernambuco in Recife.

The rate at which Mueller is scoring in World Cup games is matched only by Brazil legend Pele, who also found the net nine times in his first nine matches in the tournament.

This was a frustrating afternoon for the United States and their travelling army of fans. They failed to force Germany goalkeeper Manuel Neuer to make a save of note but their qualification was assured by Portugal’s 2-1 victory over Ghana in Brasilia.

The US will now travel to Salvador to take on the much-fancied Belgians on Tuesday. Germany will play the runners up of Group H in Porto Alegre on Monday.

Before the game, much had been made of the suggestion that both sides might play for a convenient draw that would take each of them through. But with US coach Jurgen Klinsmann, who previously managed Germany, facing off against his protege Joachim Low, neither team took a backward step from the first whistle.

Germany, playing their familiar passing game at a patient tempo, carved out a series of early chances.

Germany had to wait until the 55th minute to make the breakthrough, however, having seen Ozil and substitute Miroslav Klose go close.

It was a cross by the former that created the goal with Arsenal team-mate Per Mertesacker heading powerfully at goal and forcing Howard to push the ball into the path of Mueller.

USA celebrate reaching the last 16 for the second successive tournament