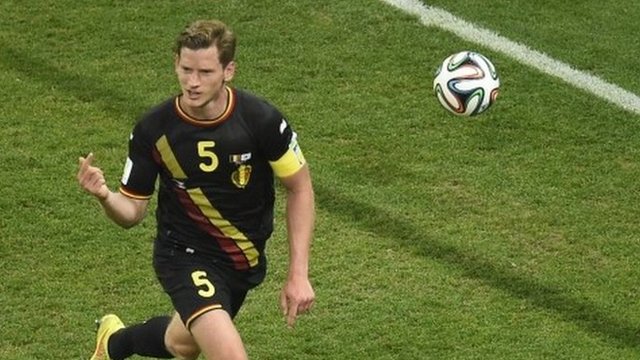 South Korea needed a win so the onus was on them to attack and they were helped when Steven Defour was sent off for a reckless tackle on Kim Shin-wook.

A Son Heung-Min cross struck the face of the Belgium crossbar but the Asian side struggled to create chances.

And Jan Vertonghen scored the Red Devils’ winner when he slotted in after a Divock Origi shot was parried.

Belgium have been criticised for a lack of flair so far in the tournament, but there is little question about their resilience as they have let in just one goal in three games and are unbeaten in their last 13 competitive matches.

Their victory – the first time the Red Devils have won three group games at a World Cup – eliminated a South Korea side who lacked a cutting edge to go with their endeavour.

South Korea boss Hong Myung-Bo apologised to his country’s fans after a 4-2 defeat by Algeria in their previous match and his side began with the greater urgency in Sao Paulo.

However, Hong’s side might have conceded a spot-kick when Kim Young-gwon cynically blocked Anthony Vanen Borre in an offence which began outside the box and continued inside the penalty area.

And despite all South Korea’s early effort they should have gone behind when a Kevin Mirallas shot broke for Dries Mertens, only for the Belgium midfielder to sidefoot high from eight yards with just the keeper to beat.

Hong’s side tried to respond, with Ki Sung-yeung’s 25-yard shot being turned around the post by keeper Thibaut Courtois.

And from the resulting corner a header back across goal came off Belgium defender Nicolas Lombaerts before being hacked off the line by Defour.

That was almost the last action of the match for Defour as he was soon sent off for a dangerous studs-up tackle which caught Kim on his shin.

With South Korea having the numerical advantage Hong brought on forward Lee Keunho for midfielder Han Kook-young at half-time.

And the substitute striker almost had an immediate impact as he had a shot blocked before heading a cross over, while a Son cross struck the face of the crossbar.

South Korea’s need to attack left them exposed at the back and Belgium took advantage.

Origi had looked lively for Belgium after coming on as a substitute and, after his 22-yard strike being parried by keeper Kim Seung-gyu, Vertonghen reacted quickest to slot in the winner.