Germany beat Argentina 1-0 in the 2014 Fifa World Cup final – but who starred in the showpiece?

Substitute Mario Gotze underlined the strength in depth of the Germany squad by coming on to score a wonderful volley in the second period of extra time.

But how did he do in our player ratings?

Germany ratings (marks out of 10) 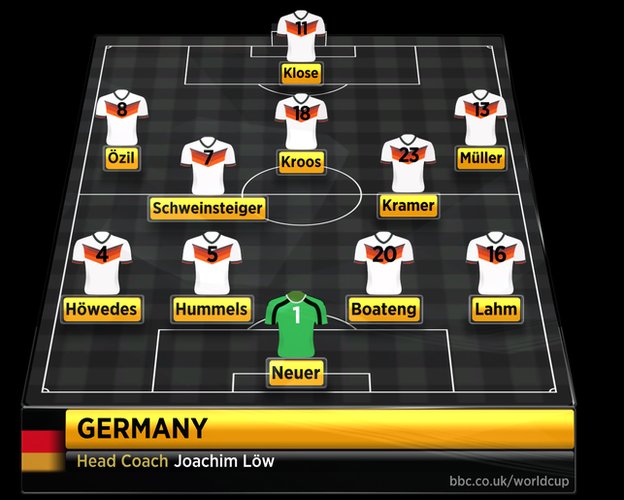 The sweeper-keeper was relieved to see Gonzalo Higuain and Lionel Messi drag shots wide of the target with only the Bayern Munich stopper to beat. Neuer was always in command of his area and showed Higuain no mercy with a punched clearance which took out the ball and his opponent. Strong display despite Argentina failing to muster a shot on target.

Danny Mills’s view: “Argentina never tested Neuer. We know he is a fantastic goalkeeper, but that was their downfall. They did not take their chances in those big moments.”

Always looked to get forward but never forgot his responsibilities further back. The Bayern man demonstrated a superb range of passes. In fact, he managed more accurate forward passes (69) than any other player on the pitch. A steady if not spectacular display.

Found himself under pressure early on and struggled (and who wouldn’t?) against the pace of Messi. Looked more assured in the second half and made a number of crucial interceptions to deny Argentina a shot on target in normal time, but ran out of steam towards the end.

Rio Ferdinand’s view: “Hummels lacked mobility – outside the box he was left a few times.”

Could have been sent off for an ugly, high tackle on Pablo Zabaleta. Howedes was unlucky to see his close-range header crash against a post in first-half injury time. Occasionally sloppy when put under pressure but generally he patrolled the left side of defence with authority.

Got better as the match progressed. Made a number of important tackles and clearances after initially being troubled by the pace of the Argentine counter-attacks. The Bayern centre-back was dominant and was Germany’s star performer. Man of the match.

Called in at the last minute to replace the unfortunate Sami Khedira, who was hurt in the warm-up. Kramer suffered a nasty blow to his head after being crudely clattered by Ezequiel Garay. Unwisely continued after receiving treatment and was replaced after half-an-hour looking dazed.

Cautioned on his 108th international appearance, Schweinsteiger was Germany’s most influential player in terms of possession and distribution. He produced what Germany would have expected from him. A calm, controlled and assured display.

Kroos – one of the World Cup’s top midfielders – had a huge let-off when his misplaced header let in Higuain, only for the Argentine to produce an even worse shot. Dropped deeper as part of a German reshuffle, but still a big influence. Wasted a great late chance to break the deadlock. Germany’s most prolific passer (107).

The Arsenal player has not had a vintage tournament and moved inside when Andre Schurrle was introduced. Made numerous tidy contributions without being really able to impose himself and was later substituted.

Arsenal midfielder Aaron Ramsey:  “Congratulations Mesut Ozil, Per Mertesacker and Lukas Podolski! It can’t get much better than that.”

The most prolific goalscorer in World Cup finals history with 16 goals buzzed around the danger zone as normal but could not sniff out his usual close-range chance. Taken out of the action with a couple of minutes of normal time remaining but rightly given a rapturous ovation for what was likely to be his farewell on the biggest stage of them all.

Danny Mills’s view: “Klose will be 40 at the next World Cup. It may be a little too much for him. What a fantastic player. He got an applause from everyone in the stadium as he went off.”

A constant threat down the right, Muller was impressive throughout with his high-tempo work rate and accurate passing. Created a few problems but was largely marshalled well by the Argentine backline.

Came on for Kramer 31 mins

Almost scored with one of his first touches with a stinging shot from Muller’s clever cut-back, and was influential from the moment he came on. None more so than with his brilliant sprint down the left late in extra time which created the crucial winning goal.

Alan Hansen’s view: “It was a great run and cross from Schurrle for Gotze’s goal.”

The Bayern Munich forward enjoyed the finest moment of his career by scoring a goal fit to win any match, let alone a World Cup final. He sweetly caressed the ball on his chest when receiving Schurrle’s perfect pass before swivelling and volleying past Sergio Romero. What a beauty!

Alan Shearer’s view: “Gotze had a hell of a lot to do when the ball came to him. The first touch was brilliant and the finish was out of this world.”

Came on in the final minute of extra time. 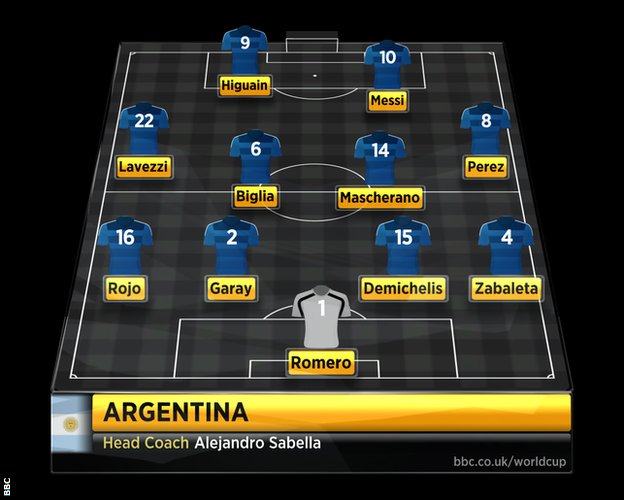 Could do nothing to stop Gotze’s close-range strike that won the World Cup, although he could have communicated the danger better to his defenders. Arguably at fault when he stayed on his line when Howedes headed against a post, but he made two good saves from Schurrle.

Schurrle’s cross for Germany’s winner came from their left, but Zabaleta was only beaten once down his flank in 120 minutes and made some vital interceptions and clearances. Also posed problems at the other end, ghosting forward down the right but seeing his pull-back elude a team-mate.

Manchester City defender Vincent Kompany:  “Pablo Zabaleta, football is hard sometimes. You made everyone proud and had a great tournament. Head up.”

Caught out for the winner when he did not seem aware that Gotze was behind him. Until then, an assured figure at the back, who frequently came across to help out left-back Marcos Rojo when Germany ganged up on him down the right.

Another culprit for Germany’s goal, when he seemed to switch off before the cross came in. That spoiled a composed defensive performance that had seen him negate Klose and be in the right place when Germany tried their intricate passing inside the area.

Found himself out-numbered at times when Lahm came forward to support Muller and it was not his fault that Germany looked so dangerous attacking down their right. Looked more comfortable after half-time when he had more support as the game tightened up.

Happy to let Germany have the ball until they reached midway inside the Argentina half, which is when he sprang into life. The shield in front of his defence, Mascherano was typically combative and disciplined, and intelligent too – he was booked for a foul on Klose, a challenge he had to make after giving the ball away.

Worked hard alongside Mascherano to deny Germany space in the Argentina half, but made a contribution going forward too, notably when he slid Messi clear at the start of the second half.

Argentina’s most effective counter-attacker in the first half, running with speed at the heart of Germany’s defence. His fizzing cross which set up Higuain for his disallowed goal was an example of the danger he posed on the break, but he was surprisingly subbed off at half-time.

Flitted about the midfield without offering the defensive work done by Mascherano or the attacking threat shown by Lavezzi in the first half. Did not make much of an impression.

Guilty of the miss of the match when he was clean through in the first half and his miserable game continued when he did find the net but was flagged offside. He was taken out by a flying Neuer after the break and also finished on the losing side. It is safe to say it was not his night.

Alan Hansen’s view: “Higuain had a gift of a chance in the first half – he was slow, pedestrian and laborious.”

In a way, this game summed up his World Cup. Messi sparkled at times with a couple of early runs but missed his big moment when sent clear at the start of the second half. He looked utterly exhausted in extra time and could not offer a defining moment for the final, least of all the tournament.

Danny Mills’s view: “We didn’t see enough from Messi, he was clearly not fit at all. His head was down, and I think he might have a slight problem with his hamstring. He held it a few times and was just walking around.”

Came on for Lavezzi, 45 mins

Struggled to stay on his feet and also continued to look short of fitness. Did not have the burst of speed to beat a defender that we see so often from him for Manchester City in the Premier League. Was lucky to not be sent off for clashing with Schweinsteiger.

Mark Lawrenson’s view: “That should have been a sending-off. Aguero was very fortunate.”

Came on for Higuain, 78 mins

Another Argentina striker to miss a golden chance, with a heavy first touch costing him when the ball was allowed to drop for him in the box. His eventual shot was off-target too. Just like all of his team-mates’ efforts, it would cost them dearly.

Danny Mills’s view: “The first touch was brilliant, you’re thinking surely now he has to score but in fairness to Neuer, he came out very quickly. I think Rodrigo Palacio was just panicked by that and he scooped it well wide.”

Brought on to add more industry in the heart of midfield for extra time, as Mascherano and Perez began to tire. Did the job that was asked of him.