Brazil’s World Cup campaign came to a miserable end as the hosts were convincingly beaten by Netherlands in the third-place play-off. 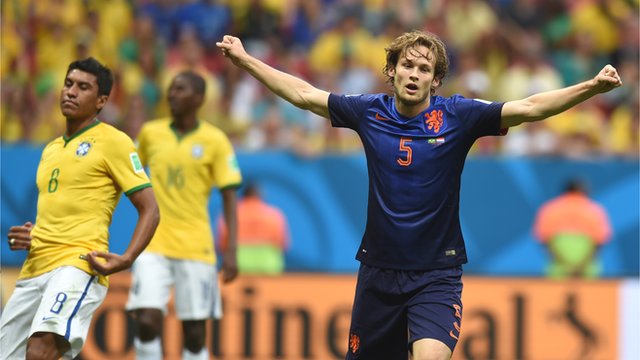 Goals from Robin van Persie, Daley Blind and Georginio Wijnaldum condemned Brazil to back-to-back defeats on home soil for the first time since 1940, following Tuesday’s embarrassing 7-1 loss to Germany in the semi-final.

As an added insult, Brazil must now watch on as their fiercest rivals Argentina take on Germany for the chance to win the World Cup at Brazilian football’s spiritual home, the Maracana, on Sunday.

Having backed their side so vocally throughout, home supporters turned on Brazil on Tuesday, cheering opposition attacks and directing loud boos at their own players, and their frustration continued in the capital, Brasilia.

Coach Luiz Felipe Scolari bore the brunt of their anger, and his long-term future as national team boss is now in doubt.

Brazil’s fans had packed homes, bars and fan parks to watch the action, leaving streets near empty, but the shock defeat by Germany left a question mark over how they would greet their team before Saturday’s game.

Brazil fans hold up a placard which reads “The feeling can’t stop. Always Brazil” prior to the third-place play-off

There was little indication in the build-up that their interest had wavered, as thousands descended on the Copacabana beach fan park in Rio de Janeiro, while the Estadio Nacional was close to capacity.

When the teams emerged from the tunnel to go through their pre-match warm-ups, the players were greeted by loud cheers, which increased in volume when injured talisman Neymar appeared.

The striker – who scored four goals before a back injury ruled him out of the Germany debacle – was wearing a full training kit, but watched from the bench as his team-mates went onto the pitch.

Neymar received one of the biggest cheers when his name was read out in the pre-match warm-up, but there were loud boos for coach Luiz Felipe Scolari and striker Fred

It seemed the Brazilian fans were determined to support their team, but they also made it known they had not forgotten the defeat by Germany as loud boos rang out when the names of Scolari and beleaguered striker Fred were read out.

Fred was one of six starters against Germany who were relegated to the bench against Netherlands, and several players from Brazil’s 23-man squad will likely have played in their last World Cup.

Whatever the future does hold, it was briefly forgotten about before Saturday’s game as players and fans once again sang the Brazil national anthem in unison.

It was as rousing a rendition of the anthem as any throughout the tournament, but thoughts of redemption lasted barely three minutes, when Brazil captain Silva pulled back Robben and the referee awarded a penalty, which Van Persie expertly converted.

The home fans were stunned into silence, but it was to get worse barely 15 minutes later when they conceded a second. This time defender David Luiz headed a tame clearance straight to Blind and the Dutch midfielder found the top corner for his first international goal.

They improved as the half wore on, but it was not enough for the players to avoid being booed as they left the field at the break.

“The boos rained down on Brazil and their manager Luiz Felipe Scolari. It is very hard to envisage him surviving in the job. If reaching the semi-final was the minimum requirement they have achieved that, but what happened in that semi-final has been made worse, if that was possible, by this result.”

The game slowed to a pedestrian pace in the second half, with Brazil fans continuing to boo Scolari every time the big screen in the stadium showed the 65-year-old’s face.

Ramires flashed a shot wide before Oscar was booked for diving as Brazil strived for some way back into the game.

Instead, though, Wijnaldum completed another miserable defeat for Scolari’s side with a third in stoppage time.

Echoing full-time in the defeat by Germany, the final whistle was greeted with a huge chorus of boos.

It was a positive send-off for departing Netherlands boss Louis van Gaal as he embarks on his next assignment, as manager of Manchester United.

But for Brazil, a tournament that started with optimism and promise for the five-time winners ended in frustration.

Neymar, out of the game with a back injury, watched on from the bench as Brazil suffered a second successive defeat

Daley Blind has been involved in four goals in this World Cup, more than any other defender in Brazil 2014

Scolari, who led Brazil to World Cup success in 2002, returned as national team manager in 2012

Iyasa misses out on Yama